From now until mid-May the Uganda Wildlife Authority will be conducting a gorilla census to better help manage and protect its endangered mountain gorilla population. The census team is optimistic about finding more habituated gorillas which would contribute to an increase in the overall population.

The Associated Press reported last week that Uganda has begun counting its population of critically endangered mountain gorillas amid confidence their numbers are steadily rising, boosting prospects for its tourism industry that relies heavily on the primates. The last census in 2011 showed the East African country had 480 mountain gorillas in two protected areas, or about half of the world's surviving population. The others are in neighboring Rwanda and Congo's forested mountain areas.

Since March a census team has been traversing Uganda's Bwindi Impenetrable National Park, collecting the gorillas' dung and examining their nests for hair samples and other clues. Their data, which will be subjected to genetic analysis in Europe, is far more reliable than a head count, according to wildlife officials. The census ends in mid-May and results are not expected for several months. The Uganda Wildlife Authority reports a huge baby boom in its habituated group, and is hoping to see the gorillas' numbers rise.

The habituated gorillas - those comfortable in the presence of humans - in Bwindi Impenetrable National Park have become Uganda's main tourist attraction for visitors who want to engage in Uganda gorilla trekking. A gorilla tracking permit costs a tourist up to $600, and last year thousands paid for the opportunity to see the primates in their natural habitat. The region's mountain gorilla population dropped sharply in the past century because of poaching, illness and human encroachment. Mountain gorillas have been listed as critically endangered since 1996, although their numbers are now growing.

To learn more about mountain gorillas, and what you can do to help them, visit AWF (African Wildlife Foundation). For a Uganda safari that includes gorilla trekking in Bwindi Impenetrable Forest, chimpanzee trekking in Kibale Forest National Park, plus classic game viewing in Murchison Falls, Bushtracks offers a 10-day safari called Uganda's Great Apes and Big Game safari which you may customize around your desired dates of travel and number of traveling companions. 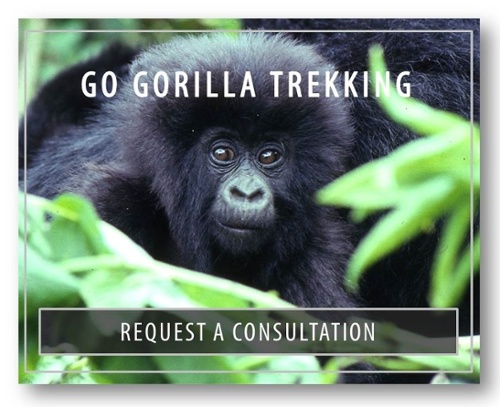